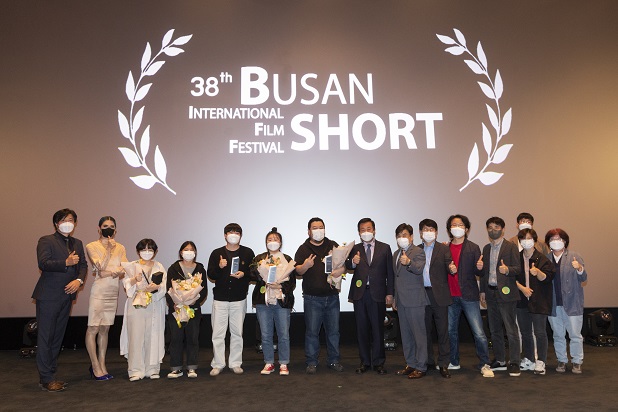 The 38th Busan International Short Film Festival (BISFF) wrapped up its six-day program on Wednesday, April 26th. The BISFF is the oldest short film festival in South Korea and the first Korean film festival to be recognized by the Academy Awards. This year's festival ran with the theme "A State of Exception,” and introduced a variety of short films that contemplate and present hope when daily life is dramatically altered. It screened a total of 125 films from 39 countries in 5 different sections. The festival, which was held at the Busan Cinema Center and BNK Busan Bank Art Cinema, was designed to interact with moviegoers at home and abroad, regardless of physical distance, while maintaining the festival's on-site and online operations. Cha Min-chul, the chairman of the BISFF, expressed his gratitude and went on to say: “The festival proved that a cultural event could be held safely on site if the audience strictly comply with the social distancing measures.”

The international competition judges said that this year's finalists were rich in terms of stories, perspectives and approaches to film. They also added that they’re grateful to all the filmmakers who gave them the opportunity to travel around the world vicariously through film at a time when a lot of people cannot physically travel due to the pandemic. The Jury Award went to <Al-Sit> (Sudan/Qatar), the Excellence Award to <The Owl> (Sweden), and the Grand Prix to <Bella> (Greece).

In the general critique, the judges of the Korean competition said that they paid attention to the films that built up drama in a creative way, despite the time constraints of short films. Actor Hae-joon, who played the main character Shin-mi in <God’s Daughter Dances>, was awarded the Best Acting Award. In addition, the Jury Award was awarded to <Blood Ties>, the Excellence Award to <Rats in the House>, and the Grand Prix to <Georgia>. Furthermore, the judges gave a special mention to <Snail>, which was not in competition but caught the eyes of the judges for its original concept and theme.

The NETPAC Award is given by the Asian Film Organization to a remarkable Asian film from among the films in the International and Korean Competition. The judges commented that most of the films dealt with a wide range of issues deeply rooted in the socio-cultural environment, especially those that show interesting experiments in animation and technical excellence using the latest digital technology. In addition, the judges explained that <Georgia> was awarded the Grand Prix because its story was complete and the fantasy-like images powerfully and poetically portrayed the couple’s effort to get justice.

Operation Kino is a program that produces and supports short documentaries to foster film talent in Busan and is sponsored by the Jung-gu District Office of Busan Metropolitan City. The judges commented that through the six films shown this year, "…we were able to see the changes in the lives and spaces of various classes living in the present era, and it was impressive that the themes of each film were expressed in a consistent manner in such a short production period." The Agora Award, selected by the film directors who visited the festival, was awarded to <San 23-1, X>, the Excellence Award to <Always> and the Grand Prix to <San 23-1, X>.

Prev List Next
CopyRight Since 2016-2021 WWW.BISFF.ORG All Rights RESERVED.